I had previously expected that recovery attempts in the EUR/USD currency pair could quickly come up against renewed war fears in Europe. At the start of this week’s trading, EUR/USD recovered the resistance level of 1.1390 ​​and quickly fell back to the support level of 1.1288 at the time of writing. The euro’s gains were halted by market concerns over the heightened risk of conflict in Ukraine, which could continue to have a suppressing effect on Europe’s single currency in the coming days. The euro made a short-term attempt to rekindle its rally in early February last week, but gains made during a brief test of 1.14 steadily declined through Friday’s close.

This was after residents were evacuated from breakaway provinces in eastern Ukraine to Russia on Friday, and rising cases of ceasefire violations raised the risk of a conflict that could continue for some time now. Commenting on the performance, Carol Kong, FX analyst at Commonwealth Bank of Australia said: “We expect the euro to extend its gains as the year progresses, in part due to our expectations of a stronger dollar. weak. An earlier than expected ECB tightening cycle could also boost the euro. However, we maintain our view that the Euro could test its February low at 1.1235 if Russia invades Ukraine.

Overall, while the mood in global markets could improve as the new week opens after French diplomacy prompted the White House to announce on Sunday that Presidents Joe Biden and Vladimir Putin are likely to meet face to face in the near future, this meeting is not necessarily an in-person. Game changer.

Global markets were concerned about the large Russian military force amassed on the Ukrainian border, but Russia’s parallel and highly interconnected attempt to coerce the United States and NATO into what Moscow calls “security guarantees” been largely ignored.

Russian forces gathered near the border in October and November to conduct ‘exercises’ before Moscow released a draft treaty in December containing a list of security-related proposals it often calls ‘demands’ that , if not met, could lead to action being taken . Military not specified. In response to a direct question about the nature of these measures, he said: They can come in all shapes and sizes. He will make his decisions based on the suggestions of our army. For his part, Foreign Minister Sergei Lavrov said in an interview on January 28 with the Sputnik, Echo Moscow, Govret Moskva and Komsomolskaya Pravda radio stations, of course, other departments will also participate in the formulation of these proposals .

The responses from the United States and NATO have so far left the Russian government with no reason to be optimistic, and that should remain the case.

The guarantees required are often misrepresented as trivialities in other media, but Ukraine’s national news agency and BBC counterpart Ukrinform covered most of the bases in the following brief January 5 summary of This year. The current camp of military forces along the Ukrainian border and the subsequent push for treaty agreements with NATO and the United States follows the same pattern of events as last year when the border itself was first traced in April and May by a large military formation.

In late May, Moscow’s Defense Minister announced that about 20 new “units and formations” would be established in the Western Military District by the end of the year due to the perceived increased threat from the NATO.

According to the technical analysis of the pair: I still see the trend for the EUR/USD currency pair to remain bearish as long as it is stable around and below the support at 1.1300. The bears are now preparing to test stronger support levels as long as global concern over the outbreak of war persists, and closest to the trend now is the 1.1265 and 1.1180 support levels, then psychological support at 1.1000. This can indeed happen if war breaks out in Ukraine. 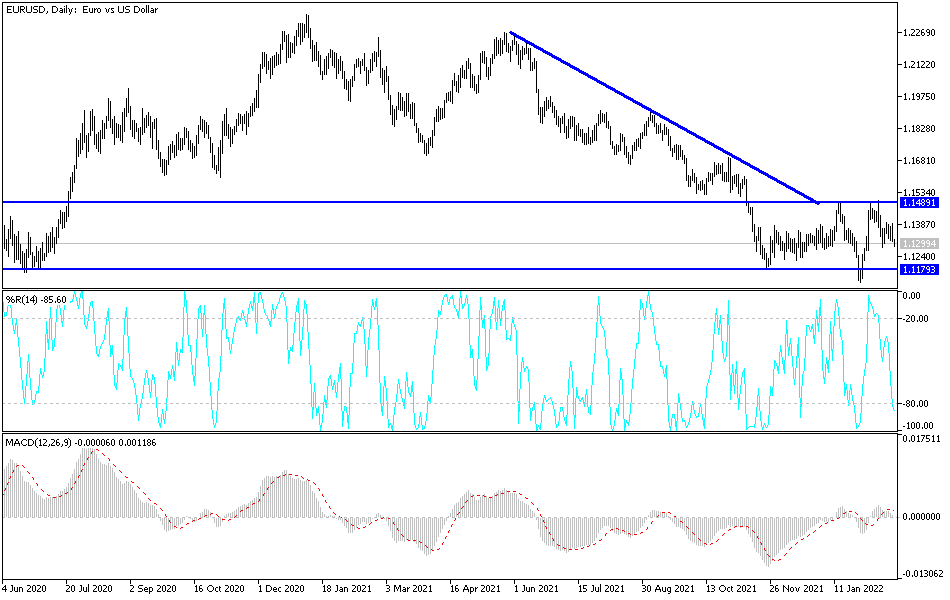