Berlin: H.E. Emir Sheikh Tamim bin Hamad Al-Thani expressed his joy at visiting the Federal Republic of Germany and his talks with H.E. German Chancellor Olaf Scholz within the framework of His Highness’ working visit to Germany.

During a joint press conference held this afternoon with the German Chancellor at the German Chancellery in Berlin, His Highness the Amir underlined that the bilateral relations between the two countries are distinguished and of a strategic nature, and that they include various policy areas and aspects of investment and partnership economics. His Highness stressed that he had discussed with the German Chancellor bilateral relations between the two friendly countries and ways to develop them at all levels, including in the fields of education, economy, investment, energy and defence, in addition to discussing the latest developments and a number of issues of common interest.

Regarding Qatari investments in Germany, His Highness said that Qatar is one of the largest investors in Germany, indicating that Qatar will strive to increase its investments in Germany in the coming years. His Highness the Amir also expressed his satisfaction with the increase in bilateral trade between the two parties, indicating that trade exchanges increased by 80% in 2021 to reach more than 3 billion dollars. His Highness also mentioned in this context the new regional offices of Volkswagen and the German Association of Small and Medium Enterprises in Doha.
Regarding Qatar’s hosting of the 2022 FIFA World Cup in Qatar, His Highness said that he has reviewed with HE the Chancellor of Qatar the preparations to host the tournament at the end of this year, noting that German fans had applied for around 600,000 tickets so far to attend the tournament, and welcomed those fans to Doha.

Regarding the foreign policy of the two friendly countries, His Highness the Amir said that it is characterized by several common pillars such as mediation and support for dialogue between the parties in conflict to achieve comprehensive and lasting solutions. . His Highness expressed his gratitude for Germany’s participation and support for the Qatari state-sponsored peace talks in several places like Afghanistan and Chad.

As for Afghanistan, His Highness said he discussed with HE the Chancellor the efforts of the State of Qatar in Afghanistan and the evacuation of thousands of people to different places. His Highness added that both sides agreed that there remain many challenges that require joint international action to provide a decent life for the Afghan people.

Regarding Iran’s nuclear program, Her Highness said he had discussed with the German Chancellor the latest developments in international efforts to peacefully resolve disputes with Iran over its nuclear program, and stressed that this approach is the approach favored by the State of Qatar to support peace. and stability in the Gulf region.

In response to a question about Qatar’s position on the latest developments in the matter and Qatar’s position on this matter, His Highness stressed the importance of cooperation between Iran, Europe and the United States of America. America, and stressed the need to resolve their differences through peaceful means. , expressing Qatar’s optimism about the potential for dialogue between these parties. His Highness emphasized that the State of Qatar supports the resolution of disputes through peaceful means, hoping that an agreement will be reached in the near future. His Highness also expressed Qatar’s commitment to mediate between Iran, Europe and the United States if asked.

In response to a question about the State of Qatar being a big player in sport and gas despite being a small country, His Highness explained that sport represents a big ambition for the State of Qatar and highlighted the great passion he has. His Highness also expressed his pride that Qatar is set to host an important competition like the World Cup this year.

His Highness the Amir pointed out that Qatar is indeed already a major gas player and is implementing expansion projects in 2026 and 2027. He described gas as an important sector and investment. Her Highness also spoke about Qatar’s view of Europe as an important market for Qatari gas, and the discussion with the German Chancellor about future cooperation in this area in order to achieve a balance in the market, in particular in light of current global conditions, noting that Qatar is ready to make more efforts in this regard.

At the end of the press conference, Her Highness expressed her thanks and gratitude to the German Chancellor and the German President for the warm welcome Her Highness and the accompanying delegation received during the visit. 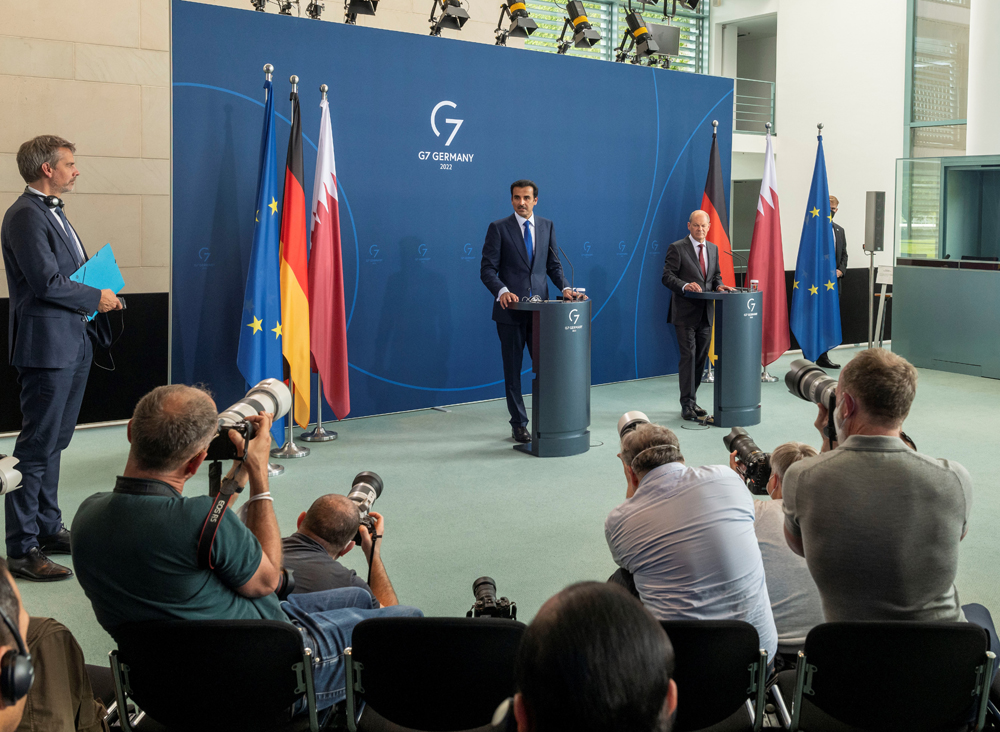 At the start of the press conference, the German Chancellor expressed his joy at receiving His Highness the Amir and thanked him for his visit to Germany. He also pointed out that the two sides discussed several issues and exchanged views on them, noting that Qatar and Germany will strive to intensify work and partnership in the future, especially partnership in the field of energy and the prospects for cooperation between the two countries.

The German Chancellor praised the significant capabilities of the State of Qatar, especially in the field of energy, describing it as an important business partner for Germany, especially in investment and economic transformation.

During the press conference, the German Chancellor expressed his thanks to the State of Qatar for its efforts in Afghanistan, praising the role it played in supporting and evacuating German and Afghan citizens, and rejoicing deepen cooperation between the two countries.

Regarding German-Qatari relations, the German Chancellor described relations between the two countries as very good, stressing that they are developing in all areas, and that bilateral cooperation is developing at different levels. He stressed the strength of bilateral ties, especially in the economic field, noting the important role played by the State of Qatar in the German strategy.

When asked if he had discussed human rights in the State of Qatar with His Highness the Amir, the German Chancellor said that the two sides had discussed many issues and welcomed the legislation and the changes in Qatar, particularly those related to the improvement of working conditions.

The press conference took place in the presence of Their Excellencies members of the official delegation accompanying His Highness the Amir.

On the German side, he was followed by a number of senior officials.

MMPRC collaborates with a popular German magazine to promote the Maldives

CEO of USA Truck: Merger with the German company “Match Made in Heaven” | Arkansas Business News